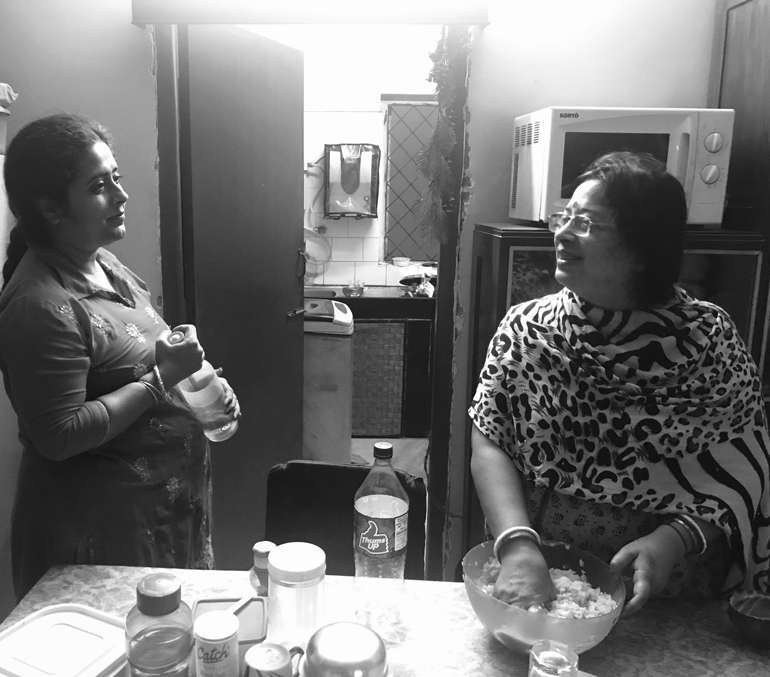 She sat there a little perplexed, wrapped in red and gold, a bride since yesterday.  Her smile, gummy and a bit yellow, reached her eyes and her nose crinkled slightly if she held it for long. I hovered nearby. I was the keeper of gifts, observant and meticulous for someone who had just hit her teens. I overheard cousins forecast vacations becoming tame now that our favourite uncle was married. Kaka, our forever shield from the grown-up world of reason, bokuni and homework. Phuchka, ice cream and Calcutta rolls in the middle of the day or listening to bhooter golpo, ghost stories, in the middle of the night with our Kaka, meant more to us, than her. I liked her name, Mallika. My brother and I call her Kaki.

She hadn’t noticed the fish fry and kasundi that I had smuggled in for her. In the din of celebration and the pelting rains that June, no one else had heard the bride’s stomach rumble, I happened to be there stacking the gifts, I paused. It happened again, this time a little louder. Kaki was hungry. All she had next to her was a bottle of a pale looking sherbet. Only nimboo pani perhaps to her rescue.

‘Brides aren’t supposed to eat on the day of the wedding.’ I had heard this cruel postulate years before that rainy evening in 1986. I wasn’t much of a rule breaker then, but any restraint on food and what you eat, felt cruel. I heard grandma.  She was standing right there, almost as if reading my mind, ‘Don’t even think of waiting for new Kaki to eat, please go and eat now, take the kiddos along’. In that rain, even the cooks were harrowed, they wanted to leave. There were boats in 1986 on the streets of Calcutta. We were lucky to savour a lavish meal despite the rains, which hadn’t stopped since June 4, so three days in a row.

They moved to Bhilai and we went to Delhi with Baba’s next posting. The holidays in Kolkata and the family home continued, but our calendars weren’t coordinated, apart from sporadic weekends over the next two decades. Kaka and Kaki had grown, they were now five, their first born, a son and then came the twins, a girl and a boy, Abhishek. 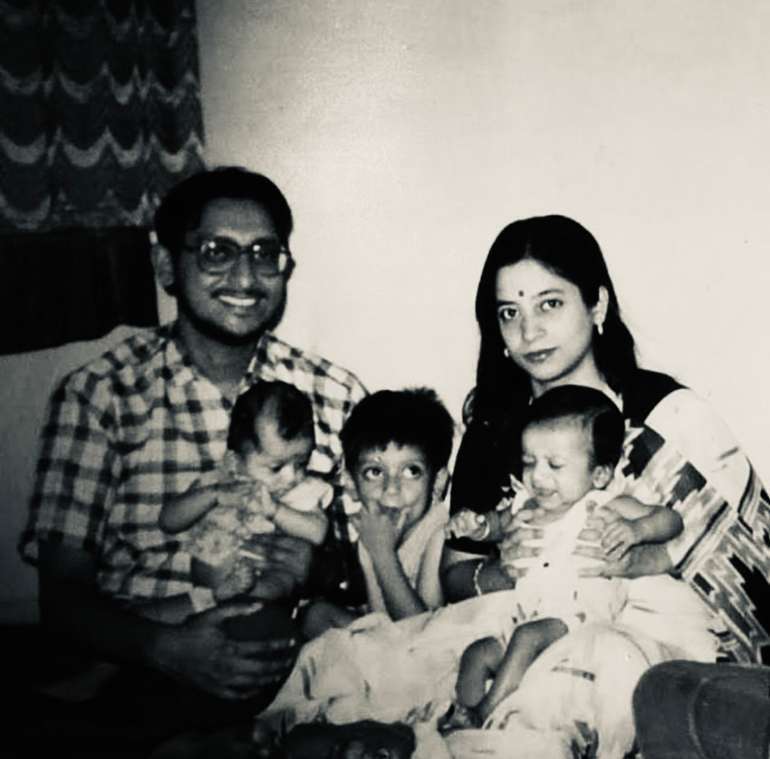 The cycle of life stays on wheels bookmarked by annaprasan, weddings and funerals. The common sport, eating together. The branches of the family sway over the menu, pride themselves in curating dishes and then an ensemble comes together, allowing common favourites to be on the same page.

The fluidity of palate for the cosmopolitan Calcuttan and the probashi deviants, is well known and evident in food choices. Apart from that, from June 1986 to November 2019, a lot had changed. Calcutta was now Kolkata. Red had made way for blue. The family was ready to welcome a new member. And the universal excitement, khaney mein kya hai? 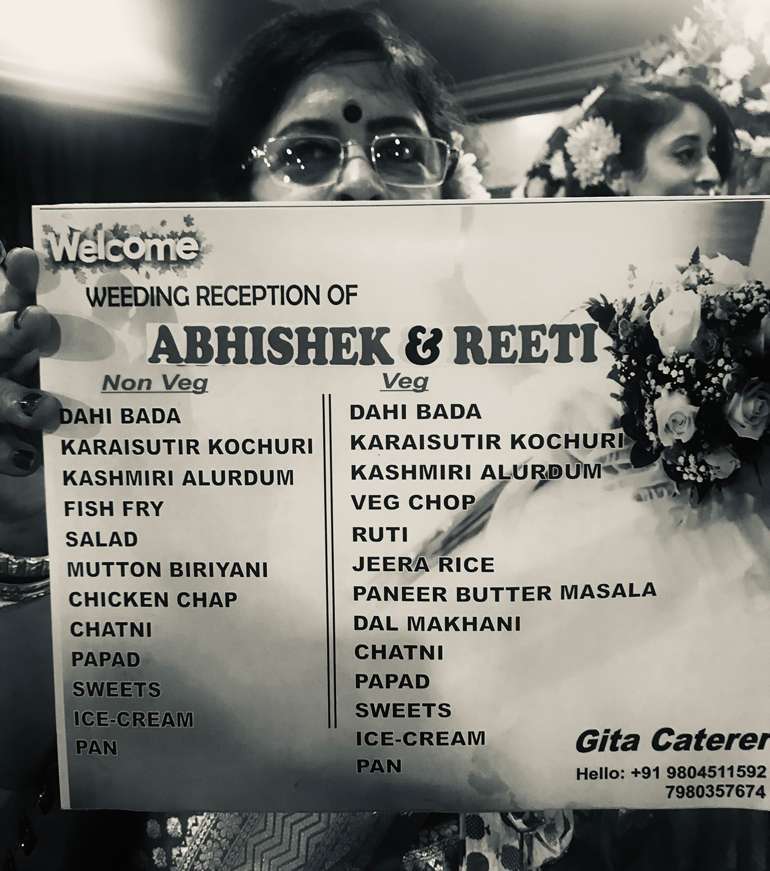 That demure bride Mallika was now the tour de force at the Rays and the occasion where she brandishes her love of food, is the menu for her younger son’s wedding reception. I was one of the earliest to arrive, the eldest among cousins. Baba, the eldest in their generation. Grandparents, now watching over us only from where they had moved on to, with an occasion called nanhimukh, a  chapter which augurs the blessings of the elders who have moved on from this mortal world. Yes, there is a varied spread of food and the pinda dan, closely associated with feeding the elders. Once the blessings have been virtually incorporated, the events proceed. This is inclusion, and respect for the netherworld and the translation is yet again, food. 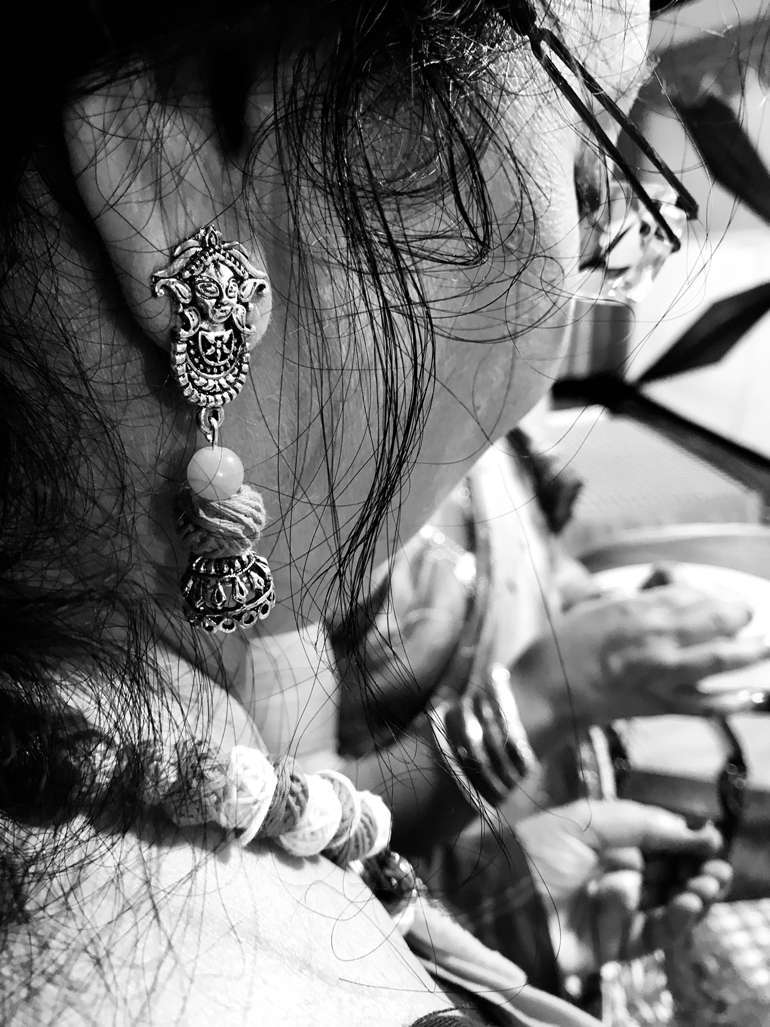 To flag off the journey of the groom, what remains unforgettable is the desi bachelor party, the aaibudobhaat. The otherwise poker-faced Abhishek with his wry humour, was visibly shy when he was explained what this feast meant. The last feast as a man who is still single and someone added, still with his parents. Abhishek chose to ignore the repartee. He asked what happens to Reeti, the bride – wasn’t she a part of this now? Elders assured him that she too would be celebrating aaibodobhaat at her home. Reassure, he grinned and swiftly sat down, waiting to be indulged. We did bring it on.

Abhishek was perplexed by the spread and that one by one, the family members would feed him. The young man had hit the gym lately and this seemed to be just the reason why he needed to hit back the weight-training but his fitness dreams lost to the rituals and he happily conceded like any foodie. Sealed with joys along with dhaan (paddy grains), doi (yogurt), dubbo (blades of doob grass) on the forehead, Abhishek got the drift that the bell metal thaal in front of him was going to be the avenue for elders to reach his hunger and he could only feast his eyes on the spread. 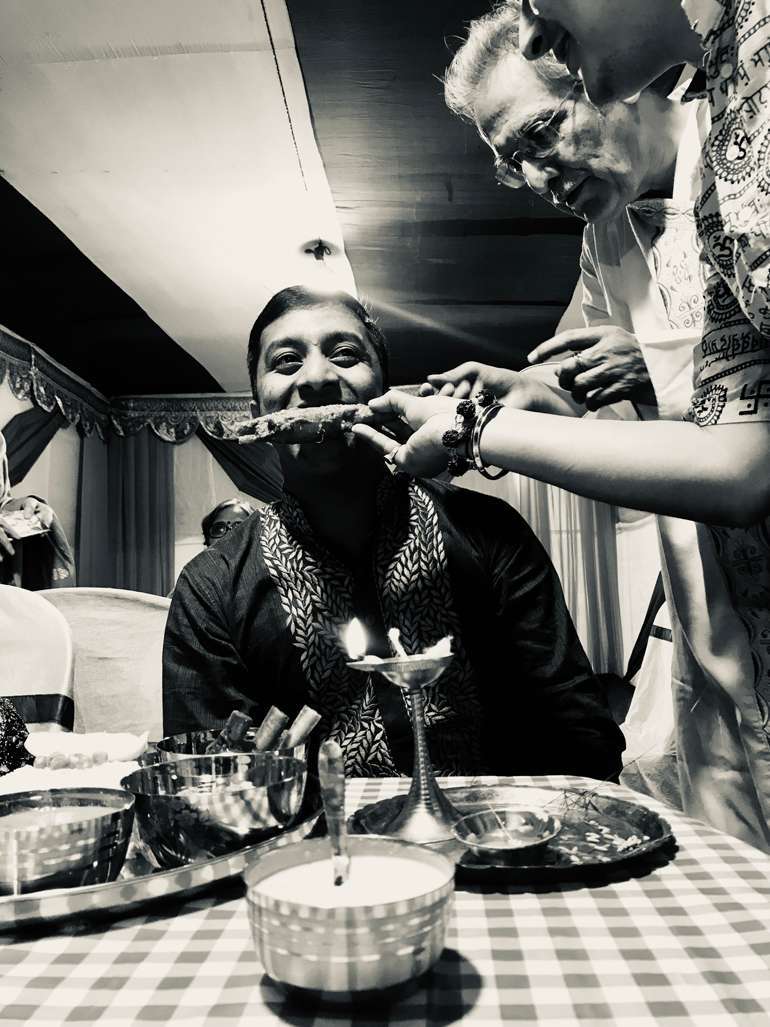 My mind by now had wandered to my own wedding which hadn’t been a four-day gala, but a temple wedding. For once, I didn’t quite miss being fed this way, but now I smile thinking of the cascade of happy jibes that flow.

I walked into the mashed morning of Dodhi Mangal remains, Kaki prepping the Sandesh (sweets made of cottage cheese), mishti doi (yogurt) with chira (a rice derivative). The food that is ‘allowed’ for the ones who are getting married, their only food for the wedding day. My mental notes relieved me of the empty stomach of the bride which had rumbled eons back.  This is what is food for the groom too. Eating just once that day of the wedding.

While the cousins had gathered again, this time Abhishek’s twin with a prank up her sleeve.

She blurted out that Abhishek was in two minds over what to eat today. Her twin was also worried about his marital night. He would stick to this mashed-up looking dish and then just go and try and sleep. We tried hard to share our elaborate plans for lunch when he just couldn’t hold a straight face, neither he nor his twin. When asked why such a harsh diet, his twin wanted to give away his secret but chose to be polite.

We were now to visit the Ganges with a wedding card and a hamper. The holy river, this was an occasion to first talk to the river and request her to be kind to the family. To be bountiful but not excessive, the fine line between joy and rage. It was hard to ignore the river as part of our festivity, most civilizations were nurtured on the banks of rivers.

The unarmed idol of Lord Kartikeya seemed as much enchanted by activities near the river-bank, yet a mute spectator flanked by faith and train lines. We were cautious of every step we took, we couldn’t keep calm as we sighted the roadside tea stall and the khuri (earthen cups). Abhishek’s twin told us that she had been privy to Abhishek’s OCD about the marital night and him having gas with the kind of food they had been gorging on.

While a few protested and expected her to stop, she gushed that our man is worried that he will fart on his wedding night.

Kaki was nearby, none of us laughed. 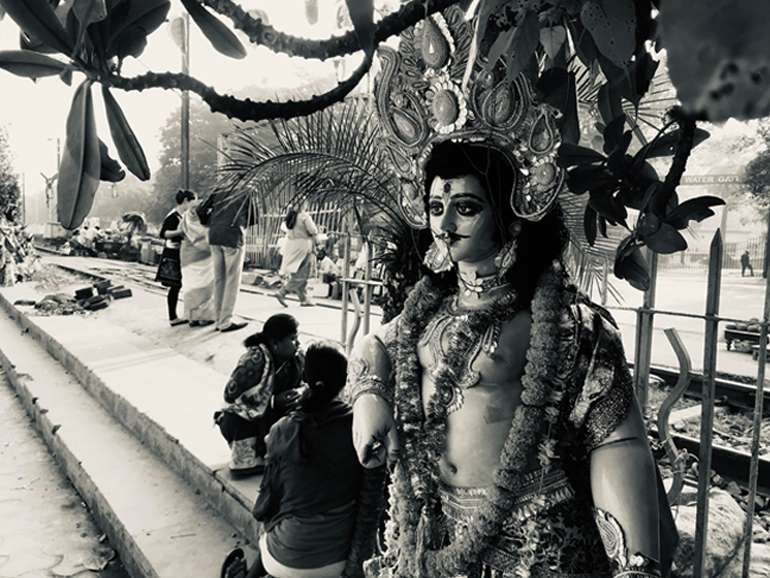 Back home, the design team was putting the bed in order. Her idea for pulling a prank was compelling – planting papaddums under the bedsheet. The sound, the smell, the mess. As if on cue, the foodiest cousin spoke, so many in India go hungry. We remained silent. The mirth inside made way for suddenly feeling responsible for hunger.

So, none of that happened, we were all too proper and the new couple escaped our imagination. 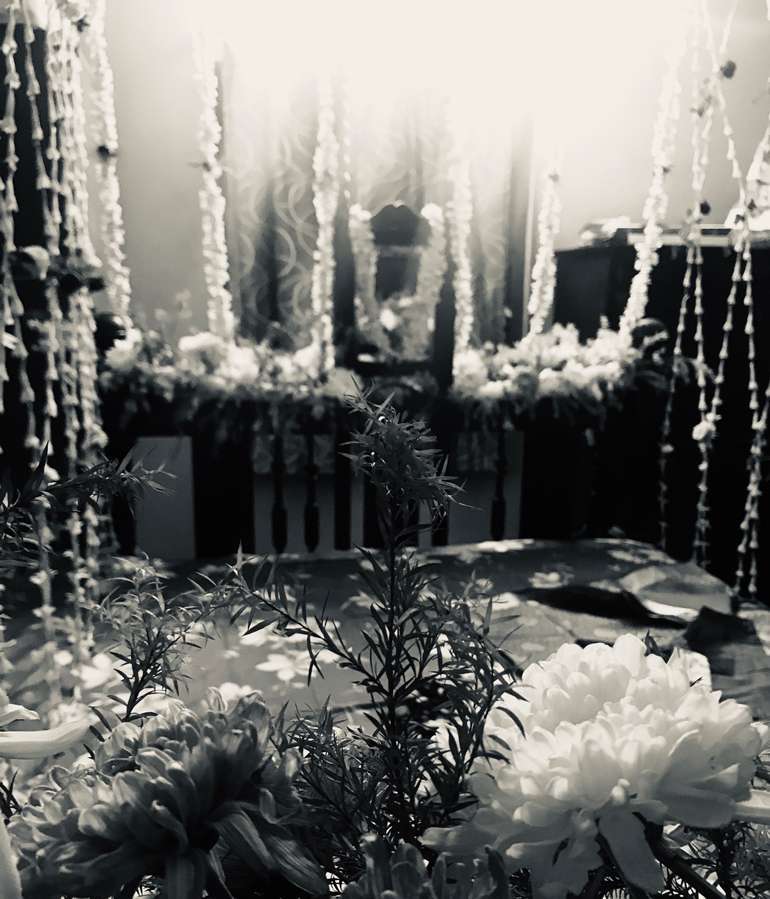 We were packed off after a quick promise of grand snacks, but someone predicted that at the bride’s home the affection would again morph into feeding us.

The jamai boron happened and more than the departing bride and her family, I think I wept more. Recalling the bidaai and knowing the checkpoint between the girl’s home and her marital home.

That invisible border that couldn’t be seen, only felt. But Reeti wasn’t so sure of this border yet. We all were glad that she was now married to our favourite cousin.

The second wave of the pandemic afflicted Reeti first. But once she got the virus, the hospitals got their goat. And next up Abhishek got the virus. The delta was now claiming this 32-year-old faster than his lungs could deal, after three weeks and two hospitals, Abhishek died.

The family doesn’t think and feel the same way ever since. The youngest one claimed by the pandemic, a fit young man with no comorbidities. Kaka and Kaki are changed for life. I haven’t been able to talk to Kaki on the loss of her young son.

Kaka and I tried speaking once.

What was unbearable was Abhishek’s birth anniversary. I reached out to them both over messages.

Hours later Kaki sent me a heart emoji and sometime later, Kaka wrote back saying that every day at tea time, morning and before sundown, they continue the session of tea with the son. The simulation of good times and reunions happens with his favourite food the mother cooks and places before the A4 sized son.

On his birthday, wrote Kaka in response to my attempt to communicate, “Last year on this day we met for the last time. Kaki prepared delicious পায়েস (payesh) for him. He enjoyed a lot and your Kaki assured him that next year also she will give this treat with the খেজুর গুড়ের পায়েস (khejur gurer payesh). Today physically he is not with us but he is with us day and night. We have our morning and evening tea together. Today Kaki prepared special খেজুর গুড়ের পায়েস and five types of ভাজা ( bhaja) along with মাছ ভাজা (maach bhaja).” 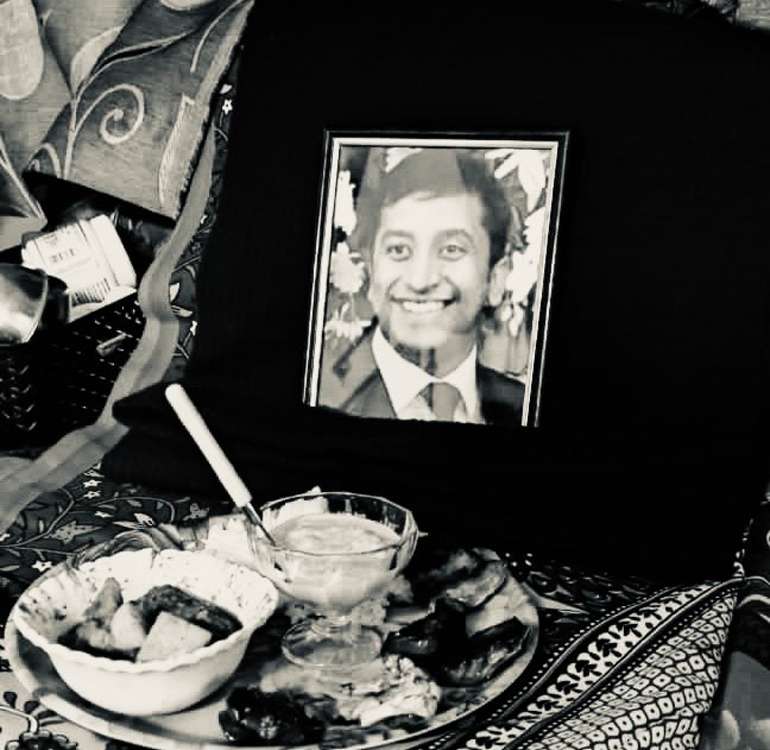 No comments yet. Why don’t you start the discussion?