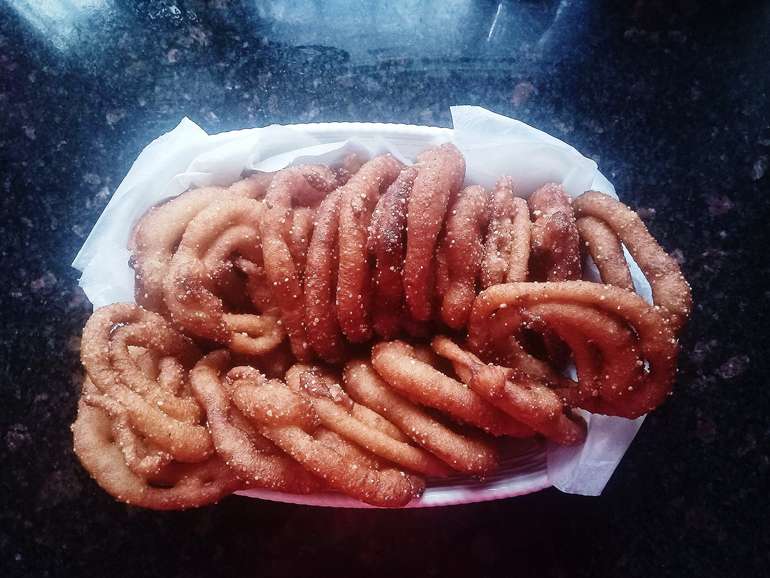 On Pustakari, Sel Roti and the Sweet Tooth of the Nepali Diaspora

My mother is from Assam. She is an ardent lover of Bigauti, a dish which is made from the excess milk produced by buffaloes and cows immediately after the delivery of the newborn. The texture is similar to chhena, a type of cottage cheese which comes mainly from the Indian subcontinent, used to make the classic Bengali dessert rosogolla. Bigauti is sweet, but my mother likes to add an extra sugar to make it sweeter. I remember my grandfather’s unease when it would be time for his domesticated cow to deliver a calf.  He had to play the part of a veterinary to facilitate  her delivery. But I never witnessed the mayhem because children were strictly kept at a distance from it all. I sat huddled with my other cousins, anticipating the calf and Bigauti that my mother would immediately make after it was born.

I did not pay any heed then, but now I realise that the task of making Bigauti would always be left to my mother. Everyone in the family loved the way she prepared fish, a skill she had taught herself.  Little did she know that one day she would marry a man from North Bengal.

In the tea estate where my father worked, I grew up amidst a hybrid culture where I shared a close bond with both my Nepali and Bengali neighbours. This was not unique to my family – it can be seen in the Terai Dooars of North Bengal. I remember my family being invited to Lakshmi Puja by my mother’s friends. Immediately, I would start discussing what clothes to wear, though I would never share with my friends that my secret excitement was for the  payesh, the rice pudding that would follow  khichuri and labra.

My mother offered kheer to her gods during Diwali. It differed slightly from payesh – she would make it with white sugar and not khejur gur, date palm jaggery. In the end, she would always place a small tulsi leaf on top before offering it to her gods. I would eagerly wait to eat it cold after refrigerating for an hour or so.

Dhakane is similar to payesh. It’s not really a dessert but a type of sweet pulao. It is a heavy dish specially prepared during festivals. I didn’t like it the first time I had it. My Kaki admitted that she had failed to cook it well. ‘I’ll get it right next time,’ she promised. 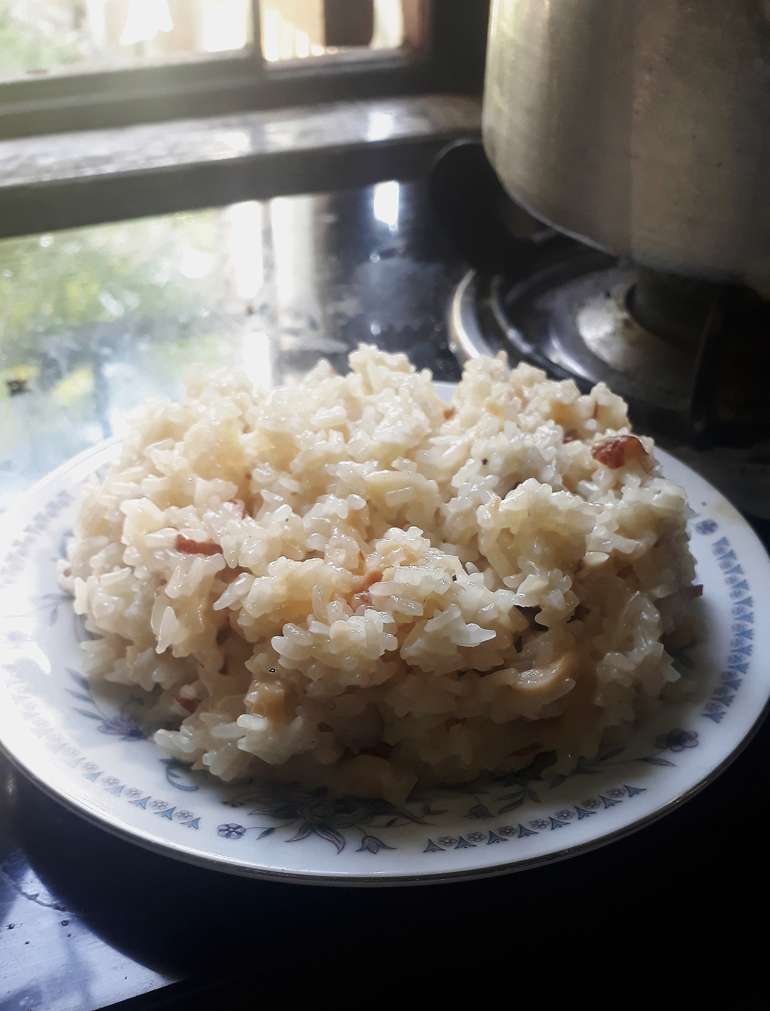 The porous border between India and Nepal has caused many misconceptions related to the Nepalis of Indian origin as compared to the ones who are born and brought up in Nepal. In India, Nepalis identify themselves as Gorkha – this happens to be the name of a municipality in the Gandaki province of Nepal and is connected historically with the name of the legendary Gorkha soldiers.

It was at my neighbour’s house where I first savoured the taste of gud paak. On her visit to Kathmandu, she was gifted with packets of it by her aunt as a parting gift. I was wondering whether it was kalakand or sandesh when my friend told me that its main ingredient was condensed milk and jaggery – hence ‘gud’. And ‘pak’ is, of course, a manner of cooking.  On putting it inside my mouth, I found the texture to be gooey, moist and, even if a little too sweet, it wasn’t overpowering. I licked off the sticky remains from my fingertips and asked for more, at least one more. 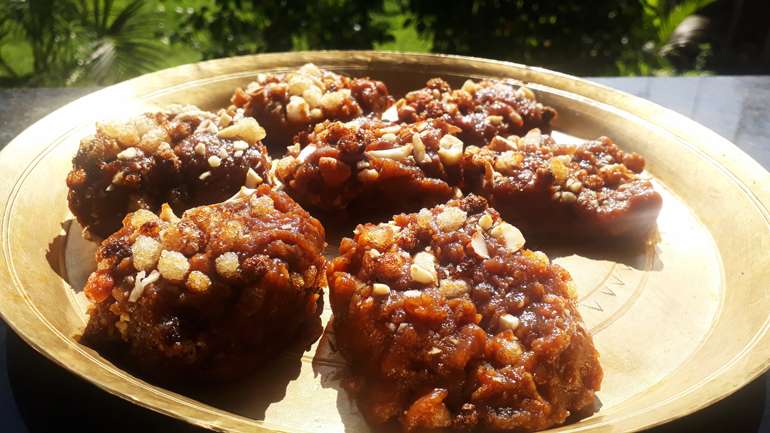 In Kalimpong, we were often treated with hard candies at Mary’s Hostel where I lived as a paying guest. There was nothing really special about those candies except that they were made out of sugar and delivered straight from Kolkata. Our ma’am had her friends in the city, and they would send her those candies that she would later distribute among us, especially during the Christmas season.

At the same time, taking a bite of Nepali candy was a moment of revelation for me. It had a name and it was called pustakari. It was brought to me by my Phupa, my uncle, whose wife was from a place called Birtamode in Nepal. They were medium-sized hard balls of irregular shapes. I learnt soon that they were made out of molasses cooked with ghee, and milk and topped with dates or nuts or coconuts. I especially liked its aftertaste – it was hard in the beginning but would give away easily. One could mistake it for chocolate because it was dark brown in colour. Soon, I found out that the locals in Nepal called it their version of chocolate. I could tell why. 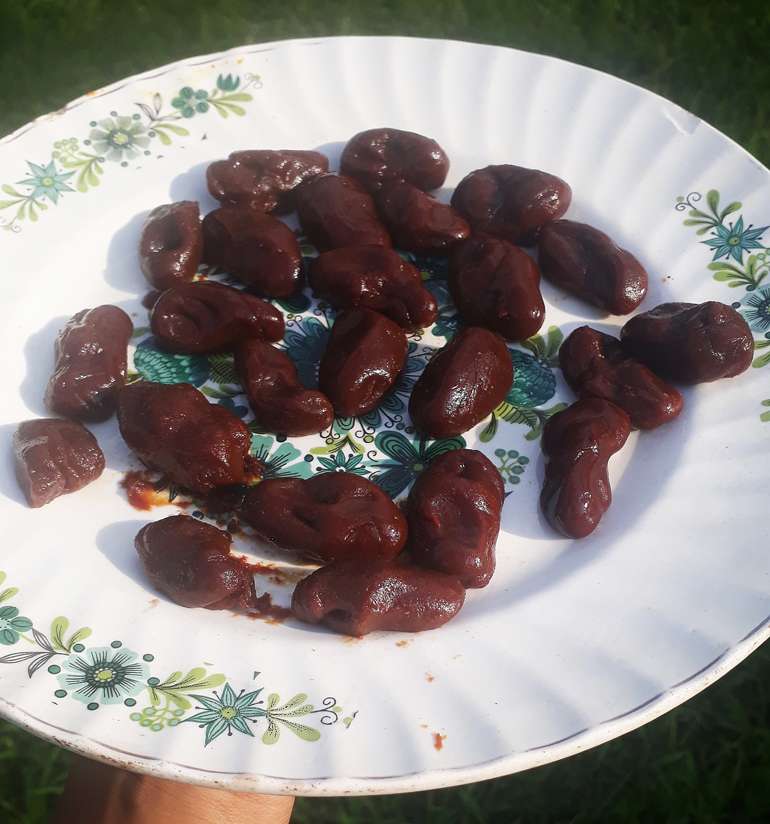 I could find a sense of belonging neither in gud paak nor in pustakari. Was there a sweet that held in it my identity as a Nepali-Indian? I love eating rasmalai. What did that say about my identity?

So many  stories are written about Darjeeling but not too many about Kalimpong where I spent nine years of my life as a school student. I am thinking of the classic Kalimpong lollipops. It is said that a Swiss Jesuit Priest Father Andre Butty introduced it back in 1950 in Kalimpong. They look nothing like what can be seen in fancy candy stores. The quintessential Kalimpong lollipops look like cigars since they are rolled into elongated shapes and are dark brown. Its rich flavour comes from milk and butter which are cooked  with sugar. It has been years since I moved out of the small hill town but every time I go back, I make sure to buy myself a packet and walk down the hill, immersing myself in its sweet taste and remembering the long-forgotten history of the Swiss Fathers. 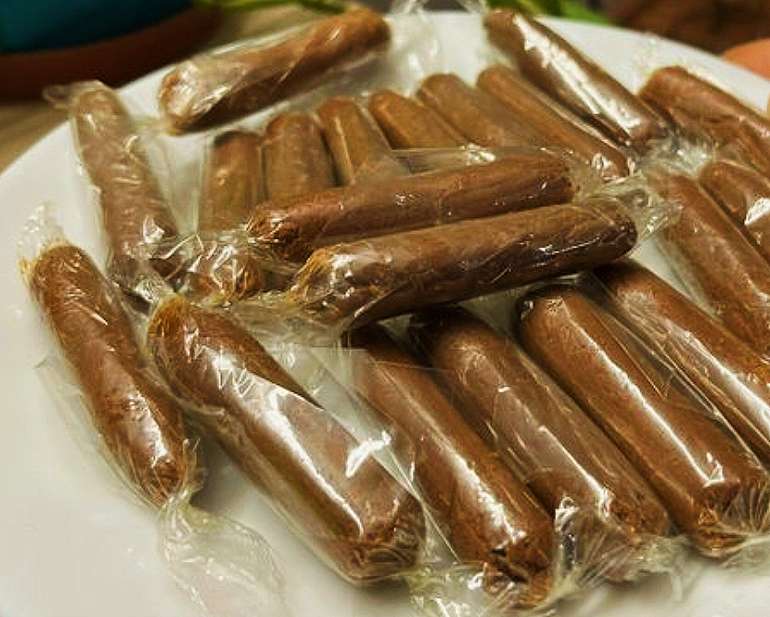 It is a universal fact for the Nepali Diaspora that any kind of festival is incomplete without sel roti. I have seen many variations but the ones that I enjoy eating are those made by my Phupu. To prepare the batter, she grinds the soaked rice in okhli, a large Nepali mortar and pestle made from wood . She then mixes this slightly grainy rice flour  with milk, sugar, clarified butter, water and her secret spices. My Phupu has a custom-made karai tai made out of iron which she places then on the clay oven. When I was a child, I would never be allowed to go near it because sel roti is prepared in burning hot oil and only an expert hand can handle the risk of not getting burnt. With years of experience, my aunt then dips her hands in the batter and pats it to check the consistency again. Once satisfied, she scoops the batter from the side of her palm, rolls her hand to an elongated pipe and makes rings on the burning oil with great concentration. It is similar to making jalebis, but while making sel roti the skill of the hand matters more than an artificial cone or a pipe.

The batter immediately changes its colour to mild brown and a jhir, a long thin wooden stick with a pointed top is used to flip them. Once ready they are taken out in batches with the help of the jhir again. My aunt knows the process well. She crinkles her nose to manage the excess heat from the oil while transferring freshly made sel roti to a cane basket covered with an old  newspaper. It looks effortless, but I have failed many times in forming perfect rings.

Sel roti is best when eaten piping hot with a side dish such as Nepali alu dum, with its vibrant red colour and the strong flavour of garlic and chillies. My aunt also serves it with pakku, goat meat slow-cooked in dry spices. Sel roti might look slightly similar to the American doughnut but the doughnut is smaller in size and tastes different from that of puffed-up sel roti. Each bite of the sel roti oozes a sweet grease and makes me wonder about the magic that an eight-hundred-year-old dish continues to create. 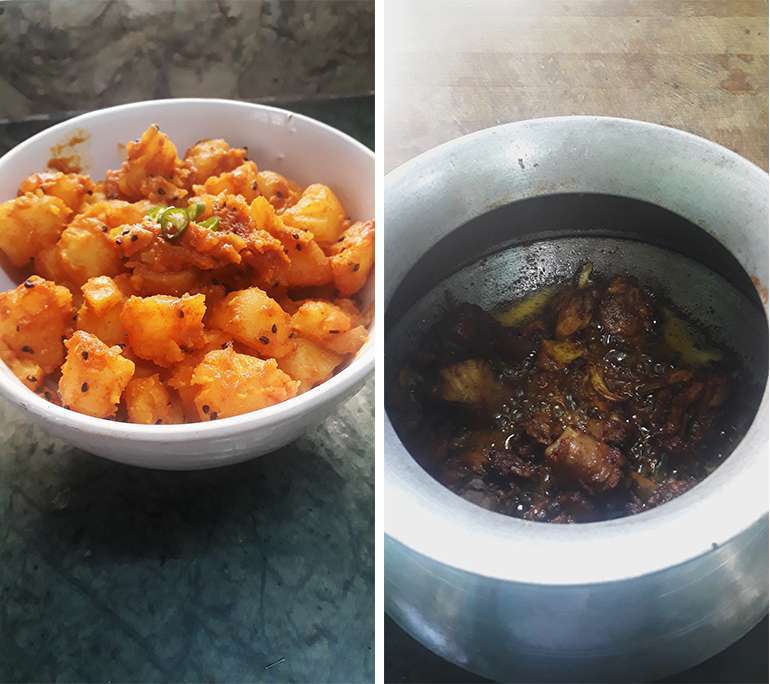 It can be stored at room temperature and can be eaten even after several days of cooking. I like to warm it on the flames of a gas stove and char it a little. It goes extremely well with a warm cup of black tea on a gloomy winter morning. I look at the mountains and bite into the next one. 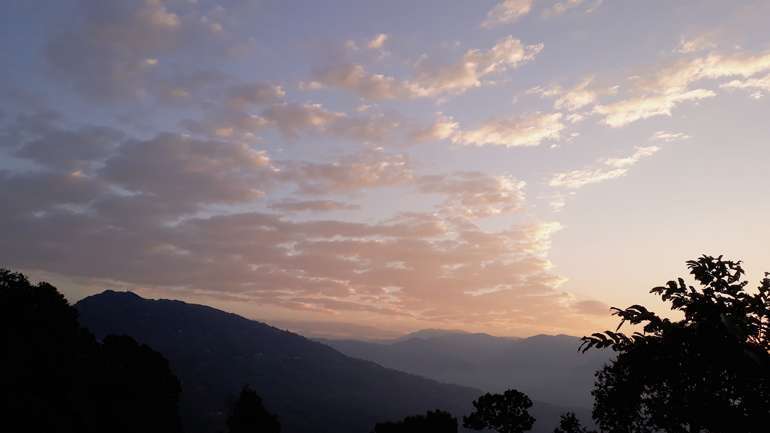